From Heraldry of the World
Your site history : Jedlicze
Jump to navigation Jump to search 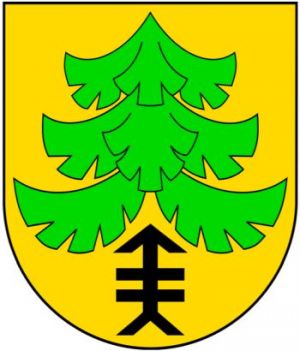 The crown of a fir tree is a symbolic emblem referring to the city's name. The symbol at the base commemorates the Karnicki family - the owners of the city at the time of the first granting of city rights. The colors of the field and the pine tree were derived from the previous coat of arms. The colors of the Carnicki emblem have been changed from silver to black according to the heraldic colour rule. In addition, the black color resembles a fir tree trunk and crude oil, the extraction of which is still an important part of the local economy.

Previously the town used a stylised pine tree as it arms. The first from the 1980s and with a colour change from around 2000. The latter arms were used until 2014.