From Heraldry of the World
Your site history : Jodoigne
Jump to navigation Jump to search 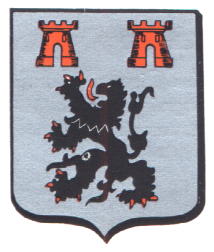 The tower appears already on the oldest known seal of the town, dating from 1211. The tower was most likely used to symbolise the fortifications of the town. The town historically belonged to the Dukes of Brabant, and the lion on the later seals and the arms is the black lion of Brabant. The tower was duplicated, but the arms still emphasise the importance of the fortifications for the Dukes of Brabant.