From Heraldry of the World
Your site history : Jumet
Jump to navigation Jump to search 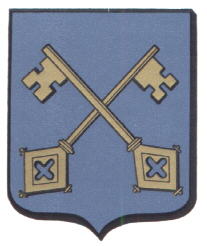 The arms were officially granted on September 27, 1909.

The arms are based on the oldest known seal of the village, known from March 1628, but probably dating from the 16th century. The seal, and all later seals, show the two crossed keys of St. Peter. These are taken from the arms of the former Lobbes Abbey, to which the village historically belonged from the 9th century until the late 18th century.