From Heraldry of the World
Your site history : Katanga State
Jump to navigation Jump to search 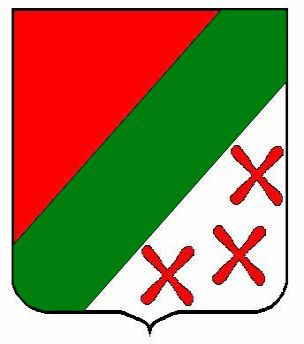 Katanga, the province of the southeast of the democratic Republic of Congo, was joined in 1900 with the Independant State of Congo, and in 1908, with the colony of Belgian Congo. On July 11, 1960, less than two weeks after the Independence of Congo, the local leader Moïse Tshombe, declared the Katanga province independent from Congo.

After a long and bloody civil war, the Katanga was reunited again with Congo in January, 1963 with the help of the UN troops.The secessionist Katanga choose a red and white flag with a green bend and accompanied by 3 red monetary crosslets of Katanga as national flag. This flag had been conceived by an advertising agency based in Elisabethville: the bar and the colours corresponded to the wish emitted in May, 1960, by the katangese members of the General executive College of Congo as for the choice of the future Congolese flag. This flag was reproduced under the shape of a shield to form the arms of the State. It is not sure that they were officialized by the authorities.

The red colour symbolises the bravery of the people and the blood which it shed to defend its homeland, the green the hope and the silver the purity; the small copper crosses (called "monetary crosslets of Katanga") were the emblems of king ( Mwami) Siri who governed this country (the Realm of Garengaze) before its annexation into Congo and symbolise the copper mining wealth of Katanga.