From Heraldry of the World
Your site history : Kemnath (kreis)
Jump to navigation Jump to search 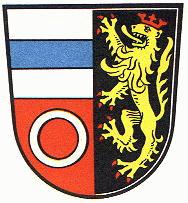 The arms show parts of the arms of the former rulers in the area.
In 1008 the Lords of Pettendorf founded the Lordship of Waldeck on the grounds of the Bidhops of Bamberg. The blue fess in the first quarter is taken from the arms of the Lords of Pettendorf. Their successors were the Counts of Leuchtenberg, the ring in the third quarter is taken from their arms. Finally in 1283 the larger part of the district became a possession of the Counts of the Pfalz. The lion is thus the lion of the Pfalz.