From Heraldry of the World
Your site history : Kensington (London)
Jump to navigation Jump to search

Incorporated into : 1964 Kensington and Chelsea 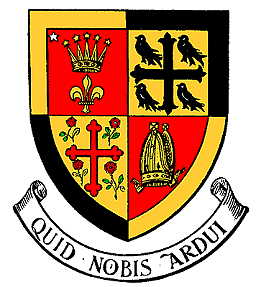 Arms : Quarterly Gules and Or a Celestial Crown in chief and a Fleur-de-Lis in base of the last in dexter canton a Mullet Argent in the first quarter a Cross flory between four Martlets Sable in the second a Cross bottony Gules between four Roses of the last stalked and leaved proper in the third and a Mitre of the second in the fourth all within a Bordure quarterly Or and Sable.
Motto: 'QUID NOBIS ARDUI' - What is hard for us

The crown and the fleur-de-lis stand for the Virgin Mary, to whom the parish church is dedicated. The other symbols refer to successive Lords of the Manor. The base of the arms is taken from the De Veres family, Lords of the Manor from the 11th-16th century Their arms were quartered red and gold with a silver star in the first quarter. After the De Veres the Manor passed to the Abbey of Abington, which is represented by the second and fourth quarter. The third quarter is derived from the arms of Sir Walter Cope, who bought the Manor in 1610.