From Heraldry of the World
Your site history : Klingenberg am Main
Jump to navigation Jump to search 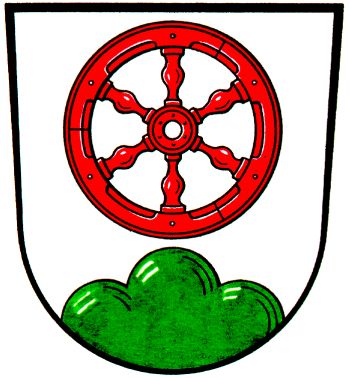 The arms are known since 1561 and show a canting mountain (Berg) and half a wheel. The wheel is the symbol of the [[Mainz (State)|State of Mainz, as the town was a possession of Mainz from 1505-1803.

In 1822 the arms were changed to a blue shield with the silver wheel. Later it became blue with a silver chief and wheel. In the late 19th century Hupp changed the colours to silver with a red wheel (see image below).

After the merger in 1976 the arms were changed to a full wheel in the colours as used by Hupp. The full wheel was also part of the arms of Trennfurt.