From Heraldry of the World
Your site history : Konstanz
Jump to navigation Jump to search 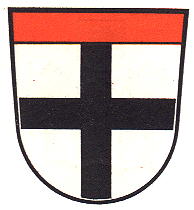 Konstanz became a city in the early 13th century and an Imperial city in 1237.

The oldest seals of the city (known since 1248) show a city gate between two towers and behind waves. The image shows the city itself and the waves symbolise the Bodensee (lake). In the 14th century the arms of the city appear on the seals, indicating that the arms date from the early 14th century. The cross in the arms is the cross of the Hochstift (Abbey) of Konstanz.

The colour of the cross, identical to the arms of the State of Köln (Cologne) is known since 1405. The red chief was added in 1417 by King Sigmund and was added to symbolise the increased freedom of the city. The arms have not changed ever since.