From Heraldry of the World
Your site history : Koper
Jump to navigation Jump to search 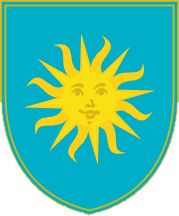 The arms with the sun have been used at least since the 19th century. The meaning I do not know.

In the mid 19th century the arms showed a Medusa head, which may either be the original arms (from which the sun was derived), or a misinterpretation of the sun.