From Heraldry of the World
Your site history : Kork
Jump to navigation Jump to search 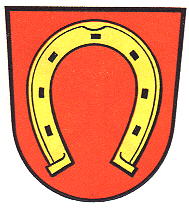 The arms and colours were granted in 1902.

Kork belonged to the Counts of Hanau-Lichtenberg and had its own (lower) court. The oldest seals of the village, dating from the 15-16th centuries showed the parish saint, St. Dionysius. A later seal, dating from the 18th century, showed a quartered shield with the village marks of Kork (horseshoe), Neumühl, Querbach and Odelshofen. In addition to the horseshoe the village used a capital letter K as well as a five- or six-pointed star as signs and on the arms.