From Heraldry of the World
Your site history : Krefeld
Jump to navigation Jump to search 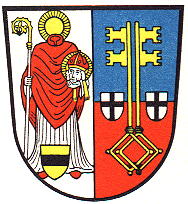 The arms were officially granted on July 3rd, 1950.

After the merger in 1930, the new city adopted arms in 1931 with the old arms of Krefeld and Uerdingen combined per fess (=horizontally). In 1950 this was replaced by the combination per pale.

On January 22, 1938 the city received new arms, in which the saint was replaced by the small shield of Moers. These arms have been used until 1945, but it took until 1950 when thenew arms were granted.