From Heraldry of the World
Your site history : Kreuzberg (Berlin)
Jump to navigation Jump to search 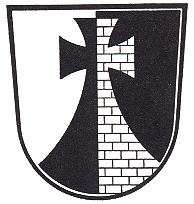 The arms are canting, showing a cross (Kreuz) rising from a mountain (Berg). The division of the arms indicates that at the time that the arms were granted half of the district had been rebuilt. Most of the district was destroyed during the second world war.