From Heraldry of the World
Your site history : L'Ecluse
Jump to navigation Jump to search 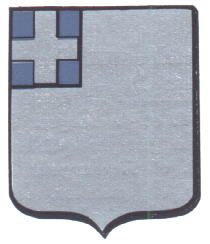 The arms are derived from the oldest known seal of the village, dating from the early 15th century. The seal showed the arms of the Bousies de Vertaing family, at the time Lords of L'Ecluse. The shield is held by the St. Mary as a supporter. When the arms were granted in 1904 the supporter was removed, but the arms of the family were not changed.