From Heraldry of the World
Your site history : Lübeck
Jump to navigation Jump to search 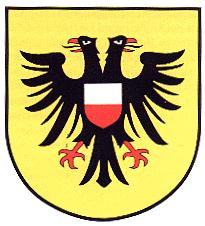 Lübeck was one of the main trading cities on the Baltic and in the whole North of Europe in the Middle Ages. It was one of the founders and the capital of the Hanseatic League, the main league of cities in those days.

The city used two different arms, often combined as double arms, one with the Imperial Eagle, as Lübeck was an imperial city (since 1226, the city was founded in 1143 by Adolph II, Duke of Holstein), and one with a divided shield of red and silver. The origin and meaning of the divided shield are unknown. It may be derived from the banner of the city, which can be seen on seals dating from the 13th century.

The colours were not only the colours of the city, but also of the whole Hanseatic League. The arms were combined in the present form in the second half of the 15th century and haven't changed since. The only time the arms were changed was during the Napoleonic times, when the city used only the divided shield, on which were placed two wings. The shield also had a chief with three bees, the mark of a city of the first rank. These arms were granted on June 13, 1811.

The great arms of the city show two golden lions as supporters and a helmet with a single-headed eagle as a crest. The colours of the cloth are silver and red.

The arms in collector's items: