From Heraldry of the World
Your site history : Laichingen
Jump to navigation Jump to search 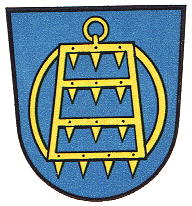 In 1364 Emperor Karl IV permitted the Counts of Württemberg to grant city rights to Laichingen, but they never did so. The oldest seal of the town thus dates from 1570 and shows a shield with the harrow. The harrow probably was a symbol for the flax culture in the area.

In the 19th century the harrow was placed under a chief with the deer antler of Württemberg. In 1922 the colours were officially described, based on a 16th century old coloured image of the arms.