From Heraldry of the World
Your site history : Langendiebach
Jump to navigation Jump to search 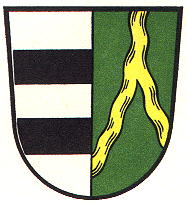 The arms were granted in 1953, and are based on the seals of the village from the 16th and 17th century. The two bars are derived from the arms of the Lords of Isenburg, to which the village belonged for many centuries. The left half is canting showing a long stream (Langen-bach) in a green field, symbolising the agricultural character of the village.