From Heraldry of the World
Your site history : Leek (Staffordshire)
Jump to navigation Jump to search 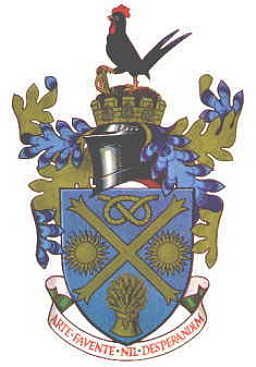 Arms : Azure a Saltire patonce between in chief a Stafford Knot in fesse two Suns and in base a Garb all Or.
Crest : Out of a Mural Crown Or charged with three Mulberry Leaves proper a Mount of Heather thereon a Moorcock also proper resting the dexter claw on a Leek small-weave Shuttle Gold threaded Gules.
Motto: 'ARTE FAVENTE NIL DESPERANDUM'-Our skill assisting us, we have no cause for despair

The basic colours of the arms are gold on a blue ground, the colours of the Earldom of Chester, Dieulacrcsse Abbey, the Kingdom of Mercia and St. Edward. The cross, is that of St. Edward, patron saint of the parish, here it is set X-wise to recall the golden saltire on blue from the arms traditionally associated with the Saxon earldom and kingdom of Mercia, in which Leek held an important place under Earl Ælfgar. The Stafford Knot, like that in the arms of the County Council, indicates the town's importance in North Staffordshire. The wheat sheaf, is from the arms of the Earls of Chester, from whom the manor of Leek was held by the monks of Dieulacresse Abbey, founded in 1214 by Ranulph, Earl of Chester. The two suns recall the well-known Leek phenomenon of the "double sunset" and also refer to those in the arms of the family of Nicholson who have been so closely connected with Leek's modern development.

The mural crown is a symbol of local government and recalls Leek's traditional title of "Capital of the Moorlands". The mulberry leaves stand for the silk industry and the mound of heather and moorcock refer, to the moorlands, and also to the local archaeological feature, Cock Low. The special type of small-weave shuttle is characteristic of the local Industry.

The motto is that which was in use before the arms were granted.

The arms are now used by the Leek Town Council.

On February 27, 2008 the local newspaper the Leek Post and Times posted an article on the correctness of the crest. According to the blason the animal in the crest is a moorcock or grouse, a typical bird in the area. However, the image clearly shows more like a common rooster or more specifically a black leghorn. A type of chicken originally from the Mediterranean area. Even though many councellors agreed, as far as I know, nothing has been done so far to change the arms. In 2015 the arms above were still shown on the municipal website.