From Heraldry of the World
Your site history : Likasi
Jump to navigation Jump to search 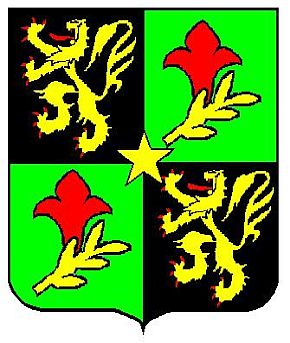 The second city in importance of Katanga, and the third city of the Democratic Republic of Congo, Likasi (former Jadotville) is a mining city the fortune of which results mainly from copper and from cobalt, but also from zinc and cadmium.

On December 21,1943, Jadotville becomes the third town set up as "city" by the Belgian colonial administration, after Leopoldville (now Kinshasa) and Elisabethville (now Lubumbashi). It did, however, never receive the official coat of arms which its city status allowed it to expect.

During the colonial period, there were however unofficial arms created by a team of teachers for the Secondary School « Athénée Royal de Jadotville ». These arms were widely used and considered the arms of the city. The arms combine the Belgium lion and the star of Congo, with a local symbol, a Hibiscus flower.

I have no idea whether the city has used any arms after the colonial time.