From Heraldry of the World
Your site history : Lingen (kreis)
Jump to navigation Jump to search 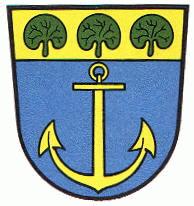 The anchor is the arms of the former County of Lingen, which was first owned by the Counts of Tecklenburg, followed by direct rule of the emperor and until 1702 by the Princes of Orange-Nassau. In 1702 it became a Prussian possession. The water-lily leaves are taken from the arms of Tecklenburg and also from the city of Freren. Freren and Lingen were merged in 1885.