From Heraldry of the World
Your site history : Los Aldamas
Jump to navigation Jump to search 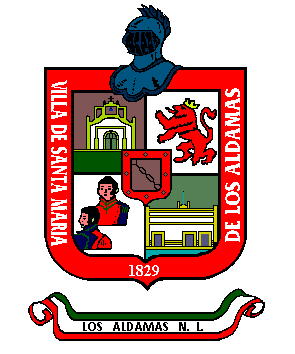 The building in the first quarter is the facade of the old Franciscan church of the mission de "Santa Maria de Los Hoyos del San Juan", founded in 1770.
The red lion in the second quarter is canting for the name of the State Nuevo León and is derived from the arms of the olf Kingdom of León, now in Spain.
The human figures in the third quarter represent the brothers Generals Ignacio and Juan Aldama , both revolutionaries who initiated with Hidalgo the war of independence in 1810.
The rectangular building in the fourth quarter is the facade of the old "Presidencia Municipal" (city hall) build in 1888.
The escutcheon, shows the coat of arms of Don Bernardino de Meneses, Monroy y Mendoza, Conde de Penalva, original owner of the land, granted by the King of Spain in 1707.
The bordure bears the official name of the town "Villa de Santa Maria de Los Aldamas" granted by the local congress in 1828.
Below the shield in a tricolor band, appears the colloquial name Los Aldamas, N.L.