From Heraldry of the World
Your site history : Loughborough
Jump to navigation Jump to search 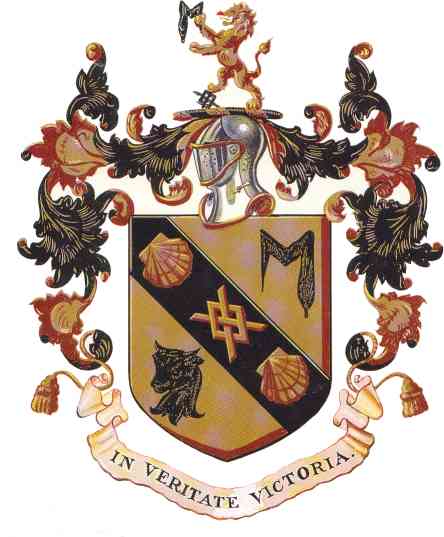 Arms : Or on a Bend Sable between a Maunch in chief and a Bull's Head erased in base of the last a Fret between two Escallop of the first.
Crest : On a Wreath of the Colurs a Lion rampant Or holding in the dexter fore-paw a Maunch and resting the dexter hind paw on a Fret Sable.
Motto: 'IN VERITATE VICTORIA' - Victory is in truth

The arms are based upon those of the Hastings family, who have been more closely and historically connected with the town than any other: two members of the family having taken the title of Baron from the town of Loughborough. Charges from the arms of the families of Beaumont and Le de Spencer, formerly great landowners and Lords of the Manor of Loughborough, are incorporated.

The Maunch and Bull's Head erased are symbolical of the Hastings family; the Fret and Escallops in the bend for Le de Spencer (a Crusader) and the crest is the lion for Beaumont with charges for Le de Spencer and Hastings. The motto "In veritate victoria," rendered "in truth lieth victory," was the motto of the former barons of Loughborough.