From Heraldry of the World
Your site history : MEDDAC Fort Leavenworth, US Army
Jump to navigation Jump to search 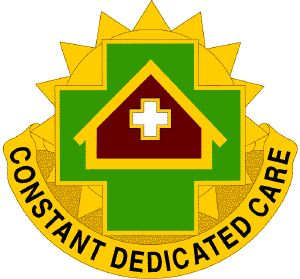 The green cross symbolizes the location of the U.S. Army Medical Department Activity at Fort Leavenworth, Kansas a pioneer Army post and a cross road of the early West. The stylized tropical medical tent on the green field symbolizes Brigadier General Edward L. Munson, for whom Munson General Hospital was named. Munson Medical Tent and developed the scheme of field training for officers and enlisted men of the Medical Department. The rising sunburst alludes to General Munson's Medico-Military service in the Philippine Islands, Japan and other assignments in the Far East; the sunburst also alludes to Kansas the "Sunflower State."

The Distinctive Unit Insignia was originally approved for the U.S. Munson Army Hospital on 25 November 1969. The insignia was redesignated on September 4 1973 for the U.S. Army Medical Department Activity, Fort Leavenworth.

Literature: Image from Olompvo on Pinterest.Information from The Institute of Heraldry, US Army.