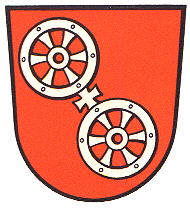 Mainz became a bishopric in 550 and an archbishopric around 800. The archbishops of Mainz also played a major role in the appointment of the new emperor. The bishops owned large possessions in the present states of Rheinland-Pfalz, Hessen and Bayern. The city was also the capital of the State of Mainz, which existed until 1803.

The oldest seals of the city show the patron saint, St. Martin, first sitting on a throne, later as the more common picture, as a knight cutting his cloak to give a piece to a beggar. Most later seals still showed the patron saint, but later the arms are shown in the seals.

The arms with the two wheels combined with a cross, appear at the end of the 13th century in the seal of Bishop Sigfried III. The city started to use the two wheels about 50 years later. Originally the two wheels were placed vertically, but were later placed diagonally. The origin of the wheels is not known, they are probably derived from the arms of the State of Mainz, but it may just as well the other way round. The colours were changed by Napoleon, who added the three bees of a city of the first rank in a head. As this head had to be red, the colours of the shield had to be changed. In 1811 the bees were removed, but the colours were not restored. Only in 1915 the old colours were restored.