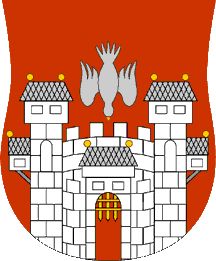 The design of the arms dates from medieval times. Already on the 14th century seal of the city (see image below) the arms show a castle and a downward-ponted flying dove. The basic idea has not changed since, but during the centuries many different varaitions on the composition have been seen.

The dove is a symbol of the Holy Spirit and was added in the seal around 1300 as a reference to the Cathedral devoted to St. John Baptist, erected in 1248. The Holy Spiit appeared when Jezus was baptised by St. John Baptist.