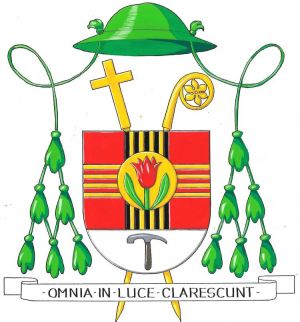 The red field with the black pale refer to Amsterdam, where the bishop was born. The golden cross is a general Christian symbol.

The hammer in base refers to the profession of his father, a cooper.

The tulip is a symbol for the South Holland province, famous for its tulips, as the diocese covers the province. The tulip also refers to the motto, Omina in Luce Clarescunt (Everything shines in the light), as the tulip will open under the rays of the sun. It thus refers to the light and power of God.