From Heraldry of the World
Your site history : Masterton
Jump to navigation Jump to search 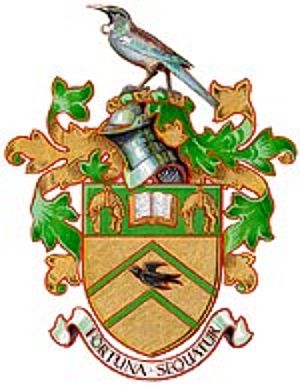 When the Borough and County Councils amalgamated in 1989, the arms were adopted by the newly formed Masterton District Council.The green and gold colours in the shield symbolise, respectively, the importance of pastoral and agricultural activities and the district's prosperity. The two golden fleece futher reinforce the significance of pastoral industries, while the open book emphasises Masterton's role as an educational centre. In the lower part of the shield, the black martlet flying horizontally on a golden background between the two green chevronels in an heraldic bird of the swallow family. The charges allude to the name Masters, the town's founding father.

The tui identifies Masterton as a New Zealand town; the motto - Let prosperity follow - reflects the optimism of Masterton residents since 1854.