From Heraldry of the World
Your site history : Mecklenburg
Jump to navigation Jump to search 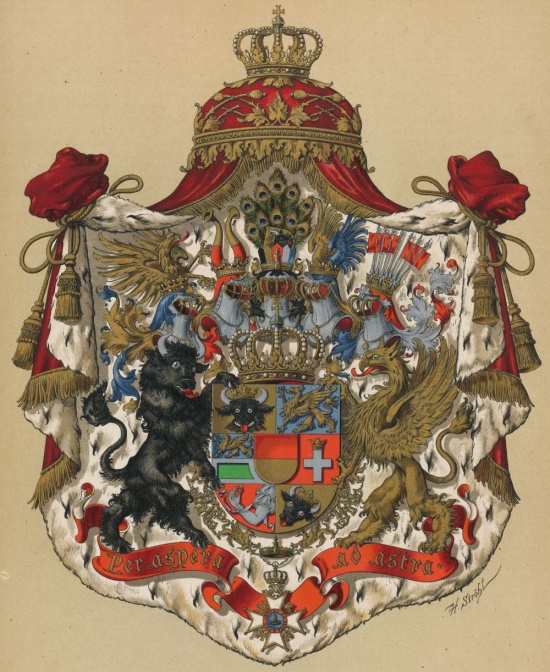 Mecklenburg is an area in the north-east of present Germany. It was a Duchy from the 13th century until 1701.

The area of Mecklenburg was settled by Slavic tribes in the 7th century. During the 9th-11th century the was under influence of the Germanic eastward colonisation. In 1160 Prince Niklot, who resided in the castle of Mecklenburg, accepted Heinrich der Löwen (Henry the Lion), Duke of Saxony and Bavaria as his overlord. Duke Heinrich made the newly founded city of Schwerin the capital of the region and founded the County of Schwerin, and gave Pribislaw, the son of Niklot most of the area in loan. Pribislaw became thus the first Prince of Mecklenburg until 1178.

Of the four new territories, Rostock kept the girffin, the other three all used the bull's head as their symbol. To distinguish the different arms, the Lords of Mecklenburg started to use the bull's head with a piece of skin of the neck still attached, as can be seen on the seal of Heinrich I, Lord of Mecklenburg (ruled 1264-1302) below.

Heinrich II of Mecklenburg (ruled until 1329) slowly increased his territory. First with the estate of Stargard, which had no arms, thus no change was made in the seals of Mecklenburg. Between 1314 and 1323 he acquired the Lordship of Rostock and he combined the arms of Mecklenburg and Rostock in his seal, see image below.

Besides the combined arms, the Dukes of Mecklenburg also used a small shield with the bull's head on smaller seals. The colours of the arms are also used from the late 14th century. During the 15th century the Dukes of Mecklenburg gradually acquired the Lordship/Principality of Werle and the Duchy of Mecklenburg-Stargard, which meant a further division of the arms. For Werle the bull's head with extended tongue, but without the skin in the neck was taken, but for Stargard no arms or symbol existed. For unknown reasons, a woman's arm with a ring was chosen as a symbol to represent Stargard in the new arms. During the next decades the basic design of the arms remained the same, but some of the smaller details were changed. The open mouth of the original Mecklenburg bull was changed into a nose-ring and the bull's head of Werle was rotated 45 degrees, based on an old seal. This resulted in the arms as shown below.

After the Thirty-years war the Dukes of Mecklenburg lost some territory to Sweden, but received as compensation the Principalities (and former dioceses) of Schwerin and Ratzeburg. The arms of these territories needed to be added to the arms, which created an even more complicated shield. The final design took a long time to complete and fianlly resulted in the arms as shown on top of the page.

In 1701 the Duchy was divided in Mecklenburg-Strelitz, and Mecklenburg-Schwerin, but both used the same arms as above until 1918.