From Heraldry of the World
Your site history : Mecklenburg-Vorpommern
Jump to navigation Jump to search 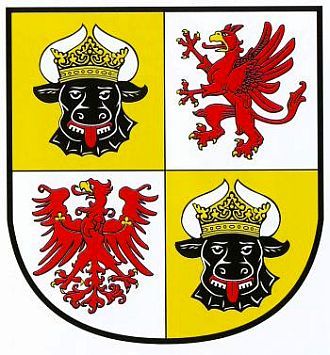 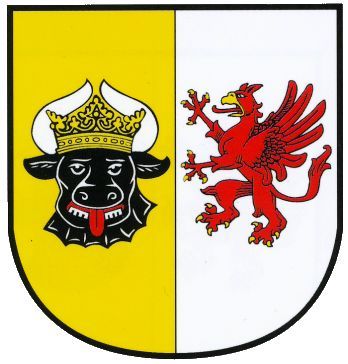 The arms are a combination of the bull's head of Mecklenburg, the griffin of Pommern and the eagle of Brandenburg. See there for the historical references.

The State is made up of large parts of the former Duchy of Mecklenburg and the old territory of Vorpommern. The Dukes of Pommern and the Margraves of Brandenburg signed in 1529 a treaty in which was stated that when the dynasty of the Dukes of Pommern would became extinct, the Margraves were the appointed successors. This happened during the 30th-year war when Bogislav XIV of Pommern was killed, not leaving any sons. The Margraves immediately claimed their new territory, but the Swedish King interfered and occupied Pommern. He did not succeed completely and Pommern was divided by Brandenburg and Sweden.
The status quo was finally accepted in the treaty of Münster and Osnabrück in 1648, thereby dividing Pommern in Vorpommern and Hinterpommern (the Swedish part). In the 18th and 19th century Brandenburg-Prussia gradually conquered the rest of Pommern.

To symbolise this division in Vor- and Hinterpommern, it was decided to use both the griffin and the eagle in the arms.