From Heraldry of the World
Your site history : Meerhout
Jump to navigation Jump to search 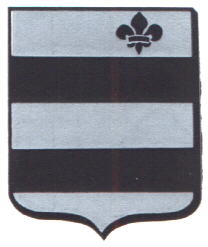 The arms are those of the city of Diest with an additional fleur-de-lys. The village was a possession of the Lords of Diest since 1398. The family used two black bars in gold. When the municipality applied for arms in 1951, they used the image ofn the 15th century seal of the village, showing the Diest arms and the small fleur-de-lys. However, they applied in the wrong colours, silver and black instead of gold and black. The arms thus show the arms of the city of Diest, which had no influence in the village, instead of the Lords of Diest.

In 1863 the council already applied for arms. These were quartered showing in the first and foourth quarter the arms of the Lords of Diest and in the second and third the arms of the Van de Wyere family, Lords of Meerhout prior to 1398. In 1398 Catharina van de Wyere married Thomas II of Diest. The local patron saint, St. Trudo, was to be placed on an inescutcheon. The arms were never granted.