From Heraldry of the World
Your site history : Merksem
Jump to navigation Jump to search 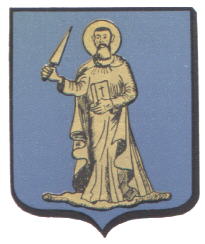 The arms show St. Bartholomew, patron saint of Merksem. As no historical colours were known in 1819 the Dutch government granted the arms in the national colours blue and gold. The colours were not changed after the independence of Belgium in 1830.