From Heraldry of the World
Your site history : Middleton
Jump to navigation Jump to search 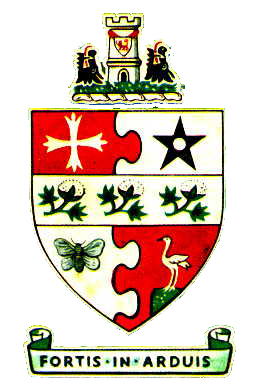 Arms : Quarterly per pale nebuly Gules and Argent on a Fesse Ermine between a Cross patonce of the second in the first quarter a Mullet Sable pierced of the field in the second a Silkworm Moth volant in the third and a Rock in base thereon a Stork in the fourth three Sprigs of the Cotton Tree slipped and fructed all proper.
Crest : On a Wreath of the Colours upon a Mount Vert between two Boars' Heads erect and couped Sable a Tower proper suspended therefrom by a Riband Gules an Escocheon Or charged with a Lion passant also Gules.
Motto: 'FORTIS IN ARDUIS' - Strong in difficulties

Most of the emblems are derived from the arms of various families named Middleton. Red and gold quarters with a silver cross flory in the first quarter were the arms of Middleton of Middleton Hall, Lancashire. The black spur-rowel is from the arms of the family of Assheton. The cotton and the silkworm moth represent local industries, and the stork, it is alleged, represents the desire for the increase of the population.

A blue boar's head erect is the crest of another family with the name Middleton and the lion rampant on a tower was the crest of the Earl of Middleton, whose motto was that adopted by the Borough.