From Heraldry of the World
Your site history : Minden
Jump to navigation Jump to search 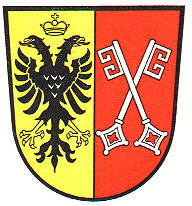 Minden became a city in the 12th century and was the seat of a bishop, later a prince-bishop. The prince-bishops of Minden were very influential and built several fortified towns to protect their lands. The arms of the diocese were the two crossed keys of St. Peter, which also became the arms of the city (and cities that were founded by the bishops, like Petershagen, Hausberge and Schlüsselburg).

The oldest seal of the city shows St. Peter sitting on a throne, the seal dates from the early 13th century. The smaller seals of the city only used the crossed keys. The imperial eagle was granted by Emperor Ferdinand II in 1627. First the eagle was placed in a separate shield, but during the years the eagle gradually moved to the shield, resulting in the present arms. The arms were granted in 1853.