From Heraldry of the World
Your site history : Mittelheim (Oestrich-Winkel)
Jump to navigation Jump to search 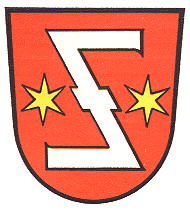 The Z is actually a so-called wolf's hook, a symbol used by the village on borderstones since 1706. In the 19th century the symbol was used on the local seal and since the late 19th century also as arms.


The oldest known use of a seal for the village dates from 1448, but the oldest existing seal dates from the 17th century. It shows St. Aegidius, the local patron saint.