From Heraldry of the World
Your site history : Motherwell
Jump to navigation Jump to search 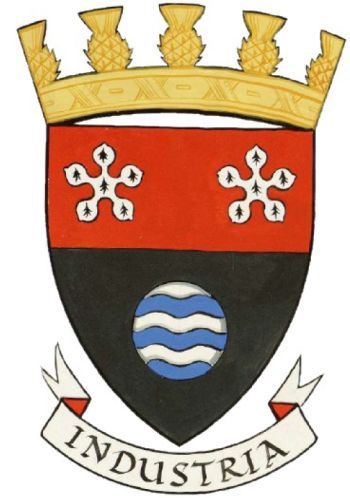 Per fess Gules and Sable, in chief two cinquefoils Ermine and in base a well Proper.

Above the Shield is placed a coronet appropriate to a statutory District, videlicet:- a circlet richly chased, from which are issuant eight thistle-heads (three and two halves visible) Or; and in an Escrol under the same this Motto" Industria".

The arms are nearly identical to the arms of the Burgh of Motherwell and Wishaw.

The upper half shows two cinquefoils for the Hamilton family as well as for Lanarkshire. The black field symbolises coal mining, whereas the (heraldic) fountain symbolises the Lady's Well in Motherwell.

The motto comes from the old seal of Wishaw.