From Heraldry of the World
Your site history : Muggendorf
Jump to navigation Jump to search 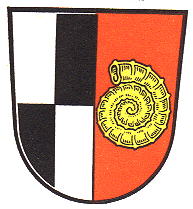 The arms were officially granted in 1965, but were already designed in 1937.

The right half shows the quartered shield of the Hohenzollern family, as the town historically belonged to the Principality of Brandenburg-Bayreuth of the family. The left half shows an ammonite, a symbol for the many fossils found in the region.