From Heraldry of the World
Your site history : Murfeld
Jump to navigation Jump to search 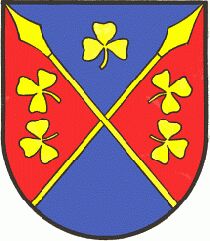 Murfeld is situated near the river Mur. The municipality itself was formed only in 1968, but the villages it is made up of are very old. This is fertile land (symbolised by the clover). However, the open landscape has often been under threat of invasion by Hungarians and Turks and was often plagued by bandits. The lances were put into the arms to symbolise the threat as well as the readiness of the people to defend themselves.