From Heraldry of the World
Your site history : National Arms of Cameroon
Jump to navigation Jump to search 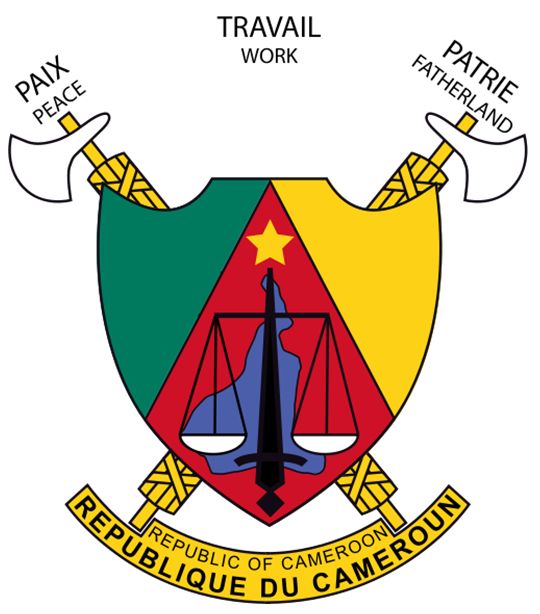 The above arms were adopted in 1986, but its design dates already from 1960.
After independence the new country adopted a seal with a woman's head. This seal was used only for one year, as the new State arms were adopted on December 31, 1960.

The new arms showed the shape of the country placed on the colours of the new flag. In the centre a sword and scales, symbols of justice, were placed. This composition, with some modifications, is still used.

In 1961 the former British protectorate of Cameroon was united with the new republic. Hence the text was changed to 'République Fédéral du Cameroun', or Federal Republic of Cameroon and the date was removed.

In 1972 the name was changed in République Unité du Cameroun (United Republic of Cameroun). In 1975 the name was reduced to République du Cameroun (Republic of Cameroon) and one of the two blue stars was removed. In 1984 the blue star was changed into a golden star. Finally in 1986 the composition was slightly changed and all mottos were made bilingual.