From Heraldry of the World
Your site history : National Arms of Guinea-Bissau
Jump to navigation Jump to search 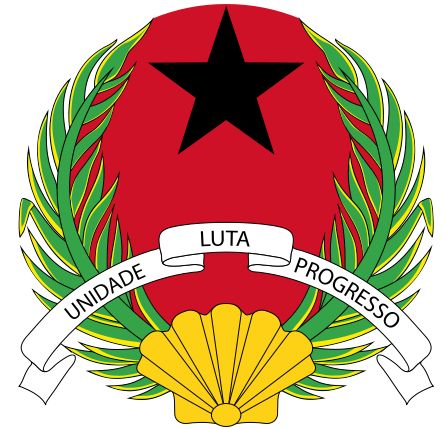 The above State Logo was adopted in 1973. The motto means 'Unity-Battle-Strength'.

In June 1932 the first arms for the Portuguese colony of Guinea-Bissauwere designed and proposed to the Ministry of Colonies. The arms follow a centralised pattern with a bordure with the castle of Portugal and a cross as used by the Portuguese discoverers. For each province a separate symbol was used as the main charge. For Guinea-Bissau a Moor's head on a golden staff was chosen. The meaning of this symbol I do not know. These arms were, as far as I know, never officially adopted and replaced in 1935.

On May 8, 1935 the then Portuguese colony received its first arms, based on the same structure as all Portuguese colonies. The upper right half and the bottom are identical for all colonies and show the 5 shields of the Portuguese National arms and the waves for the 'overseas' colonies. The upper left half differs between the colonies and for Guinea-Bissau the moor's head on a column was retained. When in 1951 the colony was transformed into a province, the text on the banner was changed. The arms were abandoned at the independence in 1973.