From Heraldry of the World
Your site history : National Arms of Italy
Jump to navigation Jump to search

THE NATIONAL COAT OF ARMS OF ITALY 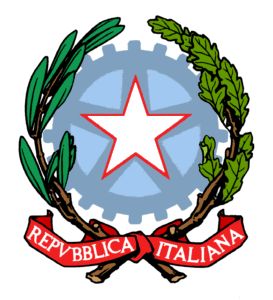 Currently Italy does not use arms, but the above logo.

After the proclamation of the Republic in 1946 a new National Symbol was chosen. The former were replaced by 'the Big Star' (lo Stellone). This big star is surrounded by a branch of an olive tree and a branch of oak (representing peace and strength respectively). Behind the star there is a toothed wheel, the symbol of work.

The modern kingdom of Italy was first created by Napoleon in 1805 from the Austrian duchies of Milano and Mantova, the duchy of Modena, the Venetian republic, papal Emilia and possessions of Austria along the Adriatic coast (Istria and Dalmatia). It was enthrusted to his adopted son Eugene de Beauharnais as viceroy. The bishopric of Trento was added in 1810.

The arms show a roman eagle as a supporter, on its breast a shield, with a silver pale charged with the blue Milanic serpent (spitting out - as it is originally ment - the first human).Both sides of the pale are divided horizontally. The upper right field shows the papal parasol with the keys of Saint Peter. The upper left shows the Venetian lion, but without bible and with a Phrygian cap (revolutionary symbol) on its head. The lower right quarter shows the white eagle of Este (for Modena) and the lower left shows the arms of Piemonte, but under to the right charged with a silver tower (for Rovigo and Feltre).
The shield is charged with a escutcheon showing the Iron Crown of Lombardy (with pinacles) in a red border with silver rings.


Around the shield is the order of the Legion d'Honneur. Above the eagle rises the Napoleonic star.

The Italian tricoloure was first used in 1797 by revolutionary militiae in Modena (the so called Cispadanian Republic). Napoleon then formed the Cisalpine Republic and this state officially adopted the green-white-red flag. The republic became the Kingdom of Italy and the flag was charged with the arms.

The Kingdom was again divided in 1814 but the cause of Italian unity (Risorgimento) was taken over by the Savoyan kings of Sardinia (who ruled the island of Sardinia, but also Piemonte, Savoy and Genua).

On March 23, 1848 King Charles Albert of Sardinia ordered his troops to fly the Italian flag in war against Austria. The 15th of April this flag with the Savoy arms in a blue border in the middle was adopted for the Kingdom of Sardinia, announcing it to be the nucleus of the new Italy.

In 1860 Sardinia with the support of the French empire succeded in uniting most of Italy and the new kingdom was proclaimed on March 18, 1861.

From 1848 to 1880 the kings of Sardinia/Italy flew a standard white with a blue border. In the center the Savoy arms on a mantle falling out of a royal crown with four national flags behind it.

On the 4th of May 1870, the Consulta Araldica issued a decree on the arms of the new kingdom. As in the royal arms of Sardinia (see there) two golden lions held a shield with a crowned helmet and under it the orders of military service of Savoy, the civil Serviceorder of Savoy, the (established on February 2nd 1868), Order of the Crown of Italy, the Order of the Saints Mauritius and Lazarus and the Order of Annunciation. The lions held lances with the national flag.

The shield however showed only the Savoyan cross, now for the hole of Italy.

Out of the helmet fell a royal mantle, but all was again engulfed with a pavillion, uncrowned but under a star resembling that of Napoleon.

The small arms of Italy as used in the royal standard from 1880 onwards and on coins issued between 1900 and 1910 are shown below :

On the first of January 1890 new state arms were decreed. The mantle disappeared, as did the star. The royal crown was taken from the helmet to crown the pavilion, sewn with crosses and roses. On the helmet was now placed the Iron Crown of Lombardy under the Savoyan crest (a winged lionhead). Behind it all rose (as in the arms of Sardinia) a banner with the Savoyan cross.

In this same pattern the Italian crownprince had these arms charged with a threepointed blue label, without the Iron Crown and with only the Annunciation Order. In stead of a pavillion a mantle fell from the crownprinces' crown, derived from the royal crown of Italy. The royal sidelines of the dukes of Savoya-Genova and Savoya-Aosta were granted likewise arms, differentiated by a border of red and silver resp. blue and gold. Their mantle falls from a ducal crown derived from the royal crown. In the fascist aera the difficult cohabitation of king and dictator found its symbol in the state arms. The Savoyan lions had to make way for the fascist 'fasces'.

After Mussolini was arrested in 1943 the kingdom returned to the former arms. In 1946 the Republic of Italy was established and the old arms were no longer used by the state. The royal arms are still used by HRH the Prince of Naples, de jure Vittorio Emauele IV, and his son Emanuele Philiberto di Savoia, Prince of Venice.