From Heraldry of the World
Your site history : National Arms of São Tomé e Príncipe
Jump to navigation Jump to search 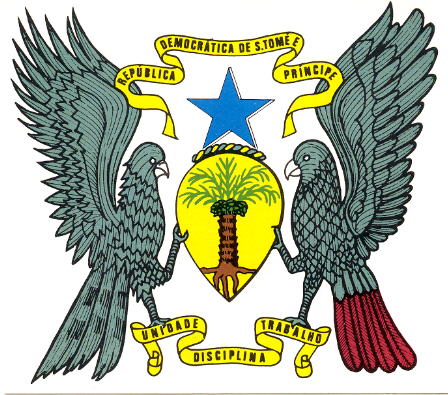 The arms were adopted in 1975 and have been confirmed several times in the constitution.

The palmtree symbolizes the main trade crop of the republic, copra. The star is for the republican form of government in Africa. The birds symbolize the local avifauna: the falcon probably is a Lanner falcon (Falco biarmicus - Falconidæ); the parrot is an African gray parrot (Psittacus erithacus - Psittaciformes) common in West Africa.

In June 1932 the first arms for the Portuguese colony of São Tomé e Príncipe were designed and proposed to the Ministry of Colonies. The arms follow a centralised pattern with a bordure with the castle of Portugal and a cross as used by the Portuguese discoverers. For each province a separate symbol was used as the main charge. For São Tomé e Príncipe a a mill-wheel with drops of water flying off was chosen. This was the personal symbol of king Alphonso V (1438-'81), during whose reign the islands were discovered. These arms were, as far as I know, never officially adopted and replaced in 1935.

On May 8 1935 the then Portuguese colony received its first arms. The arms follow the general design of the Portuguese colonies, the shield placed on an armillary sphere, crowned with a mural crown with five towers and in the shield the five shields of Portugal. The left half of the arms shows the mill-wheel with drops of water flying off. The base shows waves for the sea. 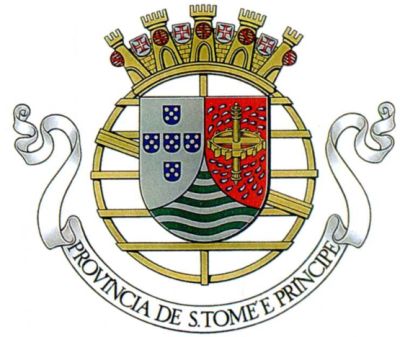