From Heraldry of the World
Your site history : Neeroeteren
Jump to navigation Jump to search 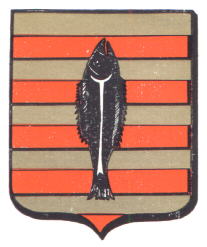 The arms were granted to Neeroeteren in 1365 by Margareta van Heinsberg, Abbess of the Thorn Convent, to which Neeroeteren belonged. The arms show the bars of the County Loon, in which the village is situated, and the fish from the counts of Chiny. Margarethe van Heinsberg descended from the Counts of Loon-Chiny.