From Heraldry of the World
Your site history : Netherlands (Sugar packets)
Jump to navigation Jump to search 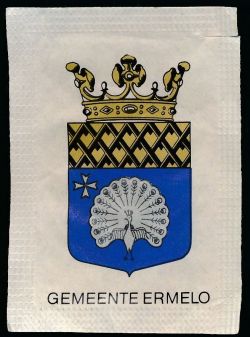 An overview of heraldic sugar packages or sugar cube wrappings from the Netherlands. Issued by producers, municipalities or hotels/companies.

Sucrology is the hobby of collecting sugar packets, including wrappers, sachets, tubes, sticks, packs, bags, and squares. Sucrologists normally collect the small packets of sugar that are most commonly found in restaurants, hotels and airlines.

There must be many issues of heraldic sugar packets and wrappings. I am always interested in obtaining more of these !

So far I have collected more as 1200 packets from the Netherlands and these are thus separated into three files: