From Heraldry of the World
Your site history : Neukölln
Jump to navigation Jump to search 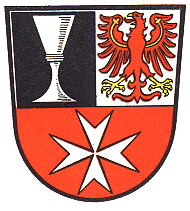 Neukölln was founded in 1360 when the Order of St. John, who owned the area, expanded their estate Richardsdorf to a real village. In 1435 the village was bought by the combined cities of Berlin and Cölln. The name of the village at the time was reduced to Rixdorf. In 1737 Bohemian colonists were allowed to settle near the village, which resulted in two villages : Böhmisch- and Deutsch-Rixdorf, which were combined in 1873. In 1899 Rixdorf was granted city rights and already in the same year attempts were made to design city arms. Out of 25 proposals the above composition was chosen, the colours, however, had to be changed according to the heraldic rules.

The above arms were officially granted on May 29, 1903. The arms show the cross of the Order of St. John and the eagle of Brandenburg. In the lower part stand the goblet of the Hussites, the church to which the Bohemian colonists belonged.

The name of Rixdorf was changed in 1912 to Neukölln and the city was incorporated into Berlin in 1920. The arms were restored on April 4, 1956 by the Berlin city council.