From Heraldry of the World
Your site history : Neuss
Jump to navigation Jump to search 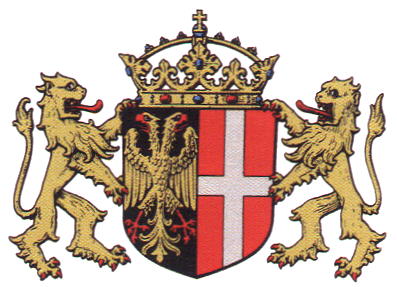 The arms of Neuss show the Imperial eagle, granted to the city in 1475 by Emperor Friedrich III.

The left half shows a silver cross in red, the origin thereof is not quite clear. It may be a symbol of the crusades in general; it may be derived from the cross of the State of Köln, to which the city belonged; or it may be the symbol of St. Quirinus or Rome.
The latter appears on the oldest knowsn seal of the city of Neuss, known from 1245, but proabably a few decades older. This very large seal (9,5 cm diameter) shows a city gate or castle, with St. Quirinus standing on a dragon and dressed as a knight. He holds a shield with a lion. On later seals and coins the cross appeared as the symbol for the city.

The crown first appears in 1560, the lions in 1637. Afterwards the arms did not really change, except for the (common) omission of the red claws and beak of the eagle in many cases.