From Heraldry of the World
Your site history : New Forest
Jump to navigation Jump to search 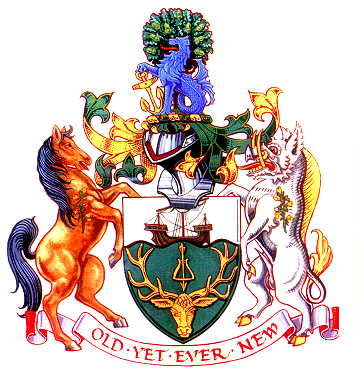 Arms : Vert a stag's head caboshed between the attires an arrow point downward surmounted by a stirrup all Or on a chief wavy argent an ancient ship sail furled issuing proper.
Crest : On a wreath of the colours, in front of an oak tree fructed proper a sea-lion sejant azure resting the dexter foot upon an anchor erect Or.
Supporters : On the dexter side a New Forest pony proper and on the sinister side a boar argent armed crined and unguled Or each charged on the shoulder with a spring of broom palewise flowered proper.
Motto: 'OLD YET EVER NEW'.

The arms were officially granted on September 22, 1976.

All three of the old councils had arms and parts of these were incorporated in the 1976 grant.

The stag's head and verderer's stirrup iron come from the New Forest RDC arms. The wavy chief line is from Ringwood and Fordingbridge's arms, while the ancient ship comes from the arms of Lymington. These devices together show that the District contains forest and coastline. The crest has an oak tree from Ringwood and Fordingbridge's arms. The blue sealion is adapted from Lymington's crest. He is based on the blue lion of the redvers family. he supports a gold anchor, symbolising the port of Lymington.

The dexter supporter is a New Forest Pony. On the sinister side is the white boar of the Courtenay family, from Lymington's arms. Both supporters are differenced with a sprig of broom representing the district's heathlands. The motto -Old Yet Ever New - was used by the New Forest RDC.