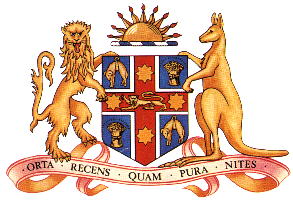 Arms : Azure, a Cross Argent voided Gules charged in the centre chief point with a Lion passant guardant and on each member with a Mullet of eight points Or, between in the first and fourth quarters a Fleece of the last banded of the second, and in the second and third quarters a Garb also Or.
Crest : On a Wreath of the Colours a rising Sun, each ray tagged with a Flame of Fire proper. SUPPORTERS: On the dexter side a Lion rampant guardant, and on the sinister side a Kangaroo both Or.
Motto: 'Orta Recens Quam Pura Nites'.

The red cross of St. George with the lion and four stars of the Southern Cross are the badge of New South Wales, and thus the main part of the arms. The (British) lion and the cross symbolise the British origin of the first settlers. The rural industry is represented by the golden fleece (sheep) and sheaves of wheat. The motto, Newly risen how brightly you shine, is also represented by the sun. The kangaroo and the lion form the link between Australia and Britain.