From Heraldry of the World
Your site history : Nidderdale
Jump to navigation Jump to search 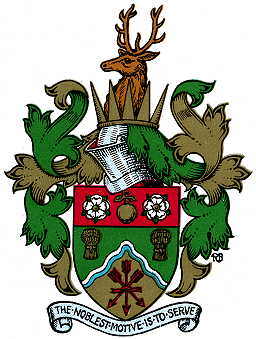 Arms : Per chevron Vert and Or a Chevronel wavy per chevron wavy Argent and Azure between in chief two Garbs of the second and in base three Arrows one in pale and two in saltire points downward banded Gules on a Chief of the last an Apple slipped and leaved Gold between two Roses Argent barbed and seeded proper.
Crest : Out of a Crown of Rays of Ancient Rome Or a Stag's Head proper; Mantled Vert doubled Or.
Motto: 'THE NOBLEST MOTIVE IS TO SERVE'.

The principal colours of green and gold, show the district as an agricultural one, a further indication being two golden wheatsheaves on the green. The gold base of the shield in the shape of a hill represents Claro Hill, the meeting place of the Claro Wapentake.

The blue and white waves represents the Rivers Nidd and Ouse (the source of the latter is within the district). The sheaf of three red arrows stands for the Battle of Boroughbridge (1322) and also for the "Devil's Arrows", the three well-known large mono­liths at Boroughbridge. The white roses denote the situation in the West Riding of Yorkshire and the golden apple between them is a reminder of the famous Ribston pippin apples.

The stag's head represents the Forest of Knaresborough. It rises from a Roman Caesar's crown, tinctured gold, which has reference to the district's Roman associations - in particular the Roman remains at Aldborough and the Roman road therefrom to Tadcaster.