From Heraldry of the World
Your site history : Ename > Grand-Halleux > Hingene > Nieuwerkerken (Limburg)
Jump to navigation Jump to search 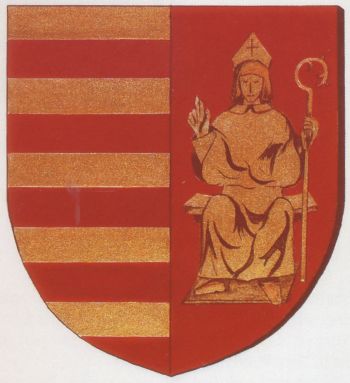 The municipality had no historical seals or arms and neither did the former municipalities. The arms were thus designed based on the former rulers of the area. The area of the present municipality was scattered among a number of (parts of) estates and parishes, all with different owners. It was decided to use the arms of the County of Loon combined with the arms of the Chapter of Saint Lambertus from Liège as arms of the new municipality. Two estates in Niewerkerke (Tichelrije and Schelfheide) as well as parts of Binderveld, Kozen and Wijer were originally loans of the Counts of Loon, whereas the parish and village of Nieuwerkerke historically belonged to the Chapter from Liège.