From Heraldry of the World
Your site history : Nieuwkerke
Jump to navigation Jump to search 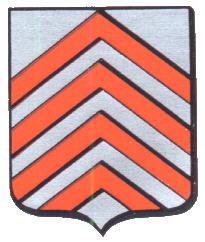 The arms were not formally granted.

The arms are based on the only known seal of the council, known from 1787, which showed four chevrons. The chevrons are derived from the arms of the Lords of Nieuwkerke, already had used in silver six red chevrons. A later map dating from 1641 also shows six chevrons. Why the council later used only four chevrons is not known.