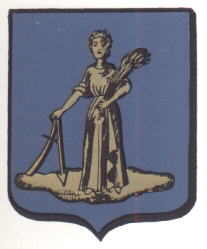 The village of Nukerke had no historical seals, so the local council applied in the early 19th century for the goddess Ceres, goddess of agriculture, as the municipality was completely dependent of agriculture. As no colours were described, the arms were granted in the Dutch national colours. After the Belgian independence the arms were confirmed in the same colours.